As a vendor focused on creating edge software solutions, IOTech is one of a number of companies addressing the rapidly growing edge computing market that spans a broad range of industry verticals. These include industrial manufacturing/industry 4.0, smart energy/renewables, building automation, smart cities/venues, retail and transportation/logistics. This article highlights some of key trends, opportunities and challenges that the edge computing community is facing as we head into the latter part of 2022. 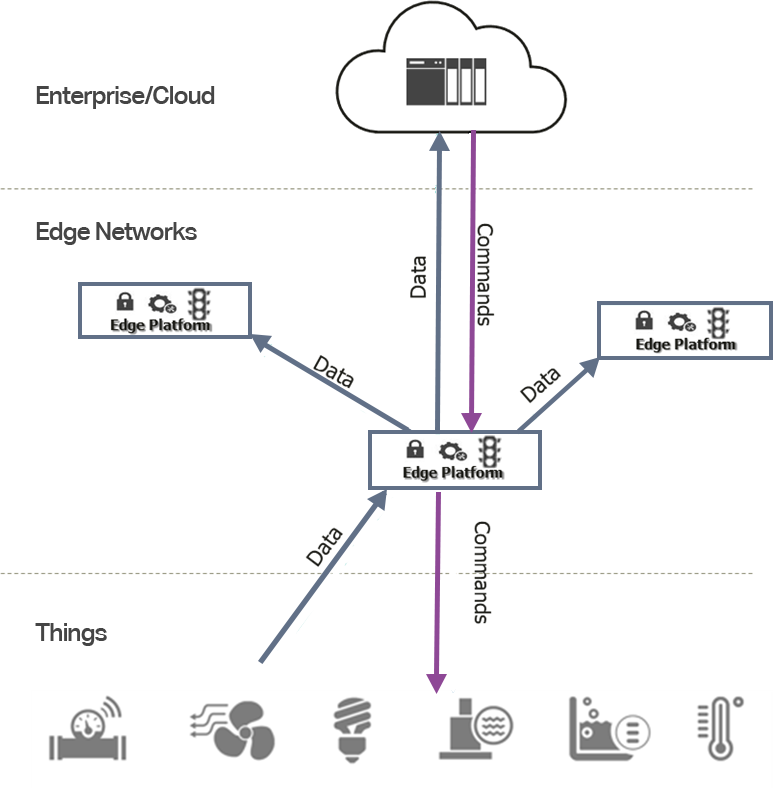 As part of an organization's digital transformation there is a clear acceleration from fully centralized cloud-based systems to distributed architectures driven by edge computing. Cloud computing alone is unable to handle the vast amounts of data created by the billions of connected devices predicted. It will not meet the need for local insights from the latency-sensitive applications on which they depend.

What is also clear is that most systems will not rely one hundred percent on edge computing solutions, either. In fact, fully autonomous edge applications are quite rare. Most systems require a hybrid solution consisting of both edge and cloud components. To be successful, users require the ability to utilize cloud resources for heavy-duty applications, while using edge computing for lighter-weight processing and local, real-time insights.

As OT and IT systems converge achieving seamless interoperability between edge and cloud environments, which have traditionally been viewed as two separate worlds is critical.

The ability to deploy more modern compute at the edge

Edge computing is enabling a new generation of smart applications that are able to leverage the latest advances in artificial intelligence (AI) and machine learning (ML).  The use of advanced analytics at the edge to support use cases such as predicative maintenance of factory equipment or video inferencing for default detection on a production line can create real operational benefits and reduce costs.  Model based AI and ML are becoming mainstream edge technologies although challenges remain with respect to how to deploy, retrain and update models running at the edge which is currently too difficult and very expensive.

As more processing and intelligence is deployed at the edge there is a growing need to replace traditional hardware centric edge systems (e.g. a PLC based control system) with more flexible, scalable, open and software defined edge infrastructures. These new systems can utilize commodity hardware (IPC and server technologies) and commercial operating system (e.g. Linux) technology.

Organizations want the ability to deploy new functionality much more easily to the local edge networks without having to rip out existing systems with all of the disruption and cost this imposes. To achieve this new edge solutions are bringing many of the benefits of cloud computing such as containerization, virtualization and modern approaches to application orchestration and updating to the OT world.

Edge computing enables the "fusion" of data from multiple sources from which new insights and business value can be derived. However, this requires the edge application to communicate with many different types of equipment using a plethora of communication protocols (e.g. Modbus, BACnet, OPC UA, EtherCAT, EtherNet/IP and many more), and to acquire and normalize the data from a disparate set of endpoints. Traditionally, an edge application would access this data directly from the devices/sensors and would inevitably lead to non-portable siloed systems. A new generation of protocol agnostic open edge platforms are critical to abstracting this complexity and providing a portable and interoperable way for application to evolve as new use cases are deployed and systems updated.

The formalized extension of abstracting the details of equipment to provide the applications (either at the edge on in the cloud) and also users with an interoperable and consistent way with which to interact with the OT environment in the right context is via a digital mirror of the equipment, this is referred to as a digital twin.  Many of the industrial software solution providers provide support in some form for digital twins. The challenge facing industry, however, is that there is not one standard for digital twin, rather there are hundreds (both general and domain specific), and there is not one responsible standardization body. There are more like ten.  For this technology to meet its potential and to support the creation of portable and interoperable applications industry must start to coalesce around a common standard or smaller subset of standards.

The business value that edge computing can brings is widely accepted and organizations are starting to deploy new edge solutions at scale.  Due to heterogeneous nature of the edge including the wide range of devices that the applications must run on such as MCUs, IPCs, IoT Gateways, Servers, combined with problem of configuring the applications to communicate with the many different OT endpoints and then monitor and potentially update a deployed system during its lifetime then edge management remains a significant challenge. At scale trying to do this with a "man-in-the-loop" is not practical and automation is required. Cloud native application orchestration technologies such as Kubernetes are being used with some success at the edge however it is only suitable for containerized workloads (what about deploying binaries?) and due to its memory requirements is not suitable for all edge devices (e.g. MCU or microcomputer), although work is ongoing by the Kubernetes community to reduce its memory footprint.  The market requires a new generation of management solutions focused on the unique needs of the edge.  The challenge is also broader than just the edge applications, an end-to-end edge management solution must also address the management of the nodes the applications will run on and the OT devices/sensors that then applications will communicate with.

In summary, edge computing is now viewed as integral part of most organizations digital transformation strategy and is starting to be deployed at increasing scale. Edge solutions from the vendor community have matured significantly over the last few years and the technology is being deployed successfully in real production environments.  Due to the specific challenges and characteristic of edge environments open technology solutions maximize user choice and lead to more successful systems over the longer term.  Perhaps the last major hurdle that needs to be addressed more adequately is how to manage the extra scale that deploying at the edge brings.

Is My Building Smarter Than me?